Our baggage was checked through to Shannon, Ireland thankfully. So just a transfer at Heathrow – but with 5-6 hour wait between flights. Whiled away our time in a café, using Heathrow wifi to check emails etc. Called Dave Jackson – who ironically (it turned out) was in another part of Heathrow waiting to collect baggage! Finally took off at 8pm on Air Lingus and arrived on schedule in Shannon where we were met by Graham and Mary. Had to pinch ourselves to think we were now in Ireland and it was the height of summer. The weather? Wet and cool of course!

First morning in Ireland, wet and raining but we didn’t care as we were jetlagged and very happy to sit in Graham and Mary’s terrace kitchen chatting and catching up on each other’s news. Great to finally be here and see their new home.

Walked down to the Killaloe shops along a path behind their house that had a gorgeous view over the River Shannon and the surrounding countryside. Mary pointed out the pub on the opposite bank of the river where we were booked in to eat that night. Had a coffee and a cake in a homey café on the corner near the intersection to the crossing over the River Shannon. Mary took us into St Flannan’s Anglican Cathedral.

An original wooden cathedral stood here from around 800 AD but was destroyed by fire in a war between two Irish tribes. Rebuilt in stone, it has a 12th century doorway, an example of Irish Romanesque stone carving  beneath which are buried both an ancient Gaelic and Viking king. 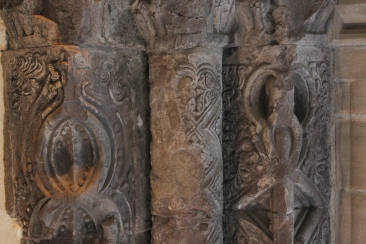 Also in the cathedral is the Ogham Stone, a standing stone with old Gaelic writing known as Ogham script. Discovered in 1916 this most unusual standing stone dates to about 1000 AD. It’s unusual in that it also bears an inscription is ‘runes’, a Scandinavian script.

Mary and Kerrie went clothes shopping in two stores in the ground floor of terraced buildings in the narrow streets while Andrew and Graham visited the library. Rested in the afternoon as we were fading, dinner at Flanagans on the Lake, old fashioned dark timbered family pub. Waiters were hilarious.

We drove into Ennis, the ‘capital’ of Co Clare as Mary had an appointment, after we went for lunch at the Food Emporium, owned by TJ, one of Mary’s brothers.

Drove through the Clare country side, history at every turn! We stopped to visit Knappogue Castle, built in 1467 which had been privately owned but now managed by Shannon Heritage and mainly used for medieval banquets.

Not open to the public but we were able to look around the Victorian Walled Garden. 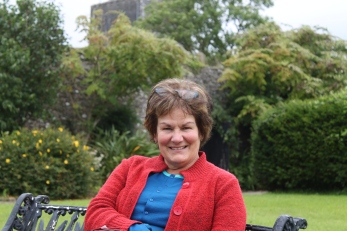 Andrew nearly got left behind!

From there Graham and Mary took us to Craggaunowen – The Living Past, near Quin. A ‘theme park’ established to recreate the lifestyle and conditions for people during the pre-historic and early Christian periods.

The site features a castle, ringfort, a lake-dwelling, presided over by a Gaelic queen ?… 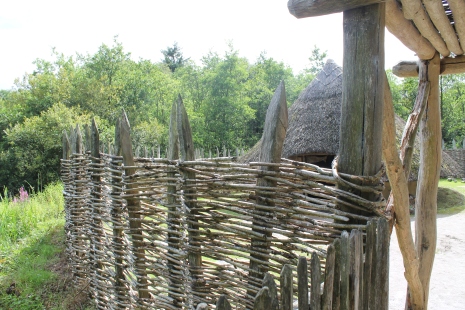 Souterrain or underground passage and the Brendan – the vessel built using traditional materials and sailed in 1976 by Tim Severin from Ireland to Newfoundland via Iceland to demonstrate that an early Irish voyage to the US by St Brendan the Navigator who died in 583 AD, was feasible. Kerrie had been before when she visited Graham before with Jessica (aged 18 months) back in 1992!!

Back home for a nap – before our first session at the Feakle International Festival of Traditional Irish Music – the 29th since it started.

The venue was Pepper’s Pub, where musicians were playing in the bar, a masterclass being led by a guitarist.

We enjoyed Guinness and G &Ts, meeting friends of Graham and Mary’s, including an Australian couple who’d taken up residence locally. At 7pm we gravitated to a marquee behind the pub for the evening’s ‘café style concert’, including food. A wonderful evening of traditional music featuring a range of styles and experience, including a Japanese duo who have taken up Irish music and the famous Tulla Ceili Band who’ve played top venues around the world. A foot-tapping tour de force of precision and passion that had us dazzled with their pace, and matched by dancers that took to the floor for a set. 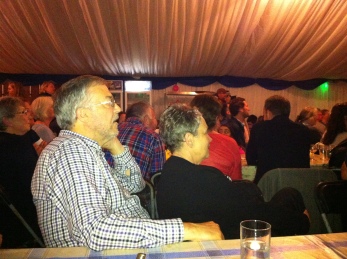 A fantastic evening – thanks Graham and Mary!!!

Set off at 9am for walk and picnic. We drove east around Lough Derg which the River Shannon flows in and out of, to a carpark where we caught a bus – one of the Clare Bus service set up by Graham. The bus took us around 8 kms further and we then walked back along a path recently completed by community and civic groups.

The sun shone mostly and we had beautiful views across the lough to the hills the other side where Graham used to live and to an island with an ancient round tower which we hope to visit later.

The weather stayed fair for our picnic – a delicious fare prepared by Mary. Perfect!!

On the way back we stopped off to see the ancient ringfort of Beal Boru dating back over a thousand years.

We rested up for an hour or two before heading back to Feakle for our second night at the music festival. The evening’s entertainment was held in the village church, St Mary’s. The recital featured a range of amazing talents – we were particularly taken with the first band – Re (moon or era in Gaelic) which included two former members of a well-known Irish band, The Hothouse Flowers. They played a magical set of traditional Irish music. So impressed were we that we bought their CD. A great memento. Afterwards, we capped off a great day with drinks at Bohan’s Bar, where the festivities continued.

There was music in the front bar and a ceili (dance) in the lounge at the back. The energy and steps were truly amazing. What most struck us was how everyone joined in, young and old, men and women – a real sense of a community bonded together through dance and music and culture.